Save the SEAL Three!

Today, on December 7th, 2009 we are remembering the attack by the Japanese military 68 years ago on Pearl Harbor, an attack that got the United States involved in World War II. But today three of our Navy SEALs are in a court room fighting a court martial and for their very military lives.

Jed Babbin at Human Events tells us why (H/T to Erick Erickson of Red State):

two weeks ago, the three SEALs — Julio Huertas, Jonathan Keefe and Matthew McCabe — were part of a platoon from SEAL Team 10 that captured one of the most-wanted terrorists in Iraq, Ahmed Hashim Abed, in a nighttime raid on or about September 1. Abed is believed to be the man behind the barbaric March 2004 ambush of Blackwater security guards in which four were murdered, their bodies mutilated and then hung from a bridge in Fallujah.

The facts of the case are a bit muddy. According to a source close to the case who requested anonymity the SEALs captured Abed and transported him to a place where they surrendered him to Iraqi custody. He made no complaint of abuse before being turned over to the Iraqis. At some point after that, the SEALs reclaimed Abed who — though still technically in Iraqi custody — was taken back for further questioning, complaining of mistreatment. There was some blood on his clothing but it’s not clear when it appeared.

There is every reason to believe the SEALs are innocent. Chapter 18 of the Al Qaeda training manual released by the US Justice Department says that members must complain of torture and mistreatment inflicted on them.

American investigators became involved and, from that point, it’s apparent that lawyers were making decisions, and the commander at the top of the local food chain — MGen. Charles T. Cleveland — at first misunderstood his options and then pushed the matter far beyond the point at which it should have ended.

Last week, Congressman Dan Burton was on Fox News defending and fighting for the SEALs while explaining why this trial, this court martial, is a sham.

Help save the the SEALs. Sign this petition to send a message that you stand with the three Navy SEALs for defending America. Petition to Adm. Gary Roughead, Chief of Naval Operations to not court martial the SEAL three!

There is also a Facebook group you can join to the protest the prosecution of the SEAL three.

Navy SEALs get busted for punching a terrorist?

OK, I admit I can't figure this one out. Our guys get busted for giving
a terrorist, who killed 4 of our guys, dragged their bodies through the
streets and then hung them from a bridge, a fat lip? And we believe him
because? Abusing a detainee? Oh please.
Here's the story from FOX,
http://www.foxnews.com/story/0,2933,576646,00.html
This is just another example of the difference in the way this
administration looks at the "War" on terror. First they wanted to
prosecute our CIA guys for "water-boarding" KSM and his ilk. Now they
want to frag our boys for thumpin' on the guy that led the raid that
killed four agents "transporting supplies for a catering company when
they were ambushed ... by gunfire and grenades. Insurgents burned the
bodies and dragged them through the city. They hanged two of the bodies
on a bridge over the Euphrates River for the world press to photograph."
Rather than punish these SEALs, they ought to give two weeks R&R in the
Med somewhere and then let them go back out and hunt terrorists - only
this time, don't bring them in alive.
Posted by Anonymous at 4:04 PM No comments:

HERE IT COMES: Regulating Free Speech on the Internet.

RePost from the POLITICO: "'TWITTER TO OVERHAUL USER LIST SEEN AS
PARTISAN,' by AP's Don Thompson: 'Social-networking site Twitter plans
to end a service that links prominent message posters with new users, a
service that was criticized in California because of perceived
unfairness toward GOP gubernatorial candidates. ... Names on the
suggested user list are selected by company officials. In California,
Democratic gubernatorial hopefuls were placed on the list, a move that
greatly boosted their number of followers. Republican candidates were
left off until recently. The difference in treatment drew outcries from
good government groups and contributed to a decision by the California
Fair Political Practices Commission to hold hearings next year. The
commission plans to examine whether it needs to regulate how campaigns
intersect with social media.'"

You had to see this coming. And, isn't it fitting that it's coming from
California-Home of Silicon Valley.

Posted by Anonymous at 9:40 AM No comments:

Note Axe and Rahm are knockin' down some serious scratch. Not to mention a free trip to Asia.


Sent from my Verizon Wireless BlackBerry

Posted by Anonymous at 2:46 PM No comments:

It must have been that alcohol-induced haze that spread across the office last week. But we digress ...

ANNOUNCING A NEW FEATURE (Like using all CAPS really makes for any fanfare.)

Fellow Pols and Wannabe Crime-fighters, you can be added to the list of Hacks, Flacks, and Dumpster Divers who get email notification every time we post something. We're even starting to consistently alert all our social network accounts - Twitter, FB, LinkedIn, FriendFeed, Plurk, Plaxo and Live - when we post so you can stay up-to-date with all the news that's weird to print. And trust us, there's enough out there we can post at least once a week.

We'll also be blatantly re-Posting and re-Tweeting some of our co-conspirators stuff with shameless disregard for the copyright and intellectual property laws of the good ol' USA. (Got a problem with that? Call 1-555-883-7448)

DISCLAIMER: In our typical elitist manner, we will reserve the right to not add you to the list if we think you're a crank, or we just don't like you.

So give us a call at the HQ, or shoot us a tweet and we'll get your subscription started. You're already a few drinks behind.

Yours for a weirder world,
Gonz O. Defenestrater

Posted by The Contrarian, a Gun-toting, God-fearing, Vast Right Wing Conspirator. at 10:56 AM No comments:

@ByronYork of the Washington Examiner reports on Dems' slick fix for Doctor's who supported Healthcare Reform and cover for Members of Dem caucus in trouble back home for their vote. $210 billion of fiscal restraint, and another example of Pelosi et al playing fast and loose with the rules: http://bit.ly/14lVgf

And here you thought this was the crowd that offered "Change We Can Believe In"...

PS: Remember LA Dem Congressman Jefferson, the guy with a hundred grand in his freezer? I note with some humor the knucklehead just got 13 years in the "cooler" - what, with time off for good behavior, he could run for something in 2016! ...

PSS: and finally, a reminder. There are only 27 days until the valiant Golden Knights of the United States Military Academy at West Point take the field of honor to defeat the godless drunken sailors of the Naval Academy.

Posted by Anonymous at 7:30 AM No comments:

@mkhammer has the deets on doctored Palin pix 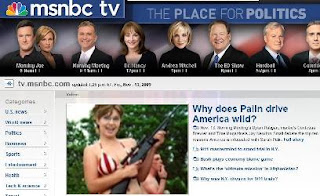 Fellow Flacks!
Ran across this twitbit on our fav moose-hunting-turned-globe-trotting-hottie-babe-pol-turned-best-selling-author (Courtesy of Mary Katherine Hamm):


"When will MSNBC (noted "real" news org) apologize for use of Palin photos well-known to be Photoshopped? http://bit.ly/1QxMGK"


Just can't get enough of that gal, eh! Oh, did we mention, the woman hunts moose.

Sent from my Verizon Wireless BlackBerry
Posted by Anonymous at 7:11 AM No comments:

Seriously, this is funny. I wonder if this is actually a part of Health Care
Reform. If not, it should be! Nah, just a joke.
Check it out on YouTube here
Posted by Anonymous at 6:21 PM No comments:

PeloBamaCare: And the magic number is ...

111. That's the number of new government agencies that get created. Get the whole list here:

Million new jobs created, huh? Guess where they all get created? Yep, you got it, Mr & Mrs America. Federal Government.
Sent from my Verizon Wireless BlackBerry

Posted by Anonymous at 2:45 PM No comments: